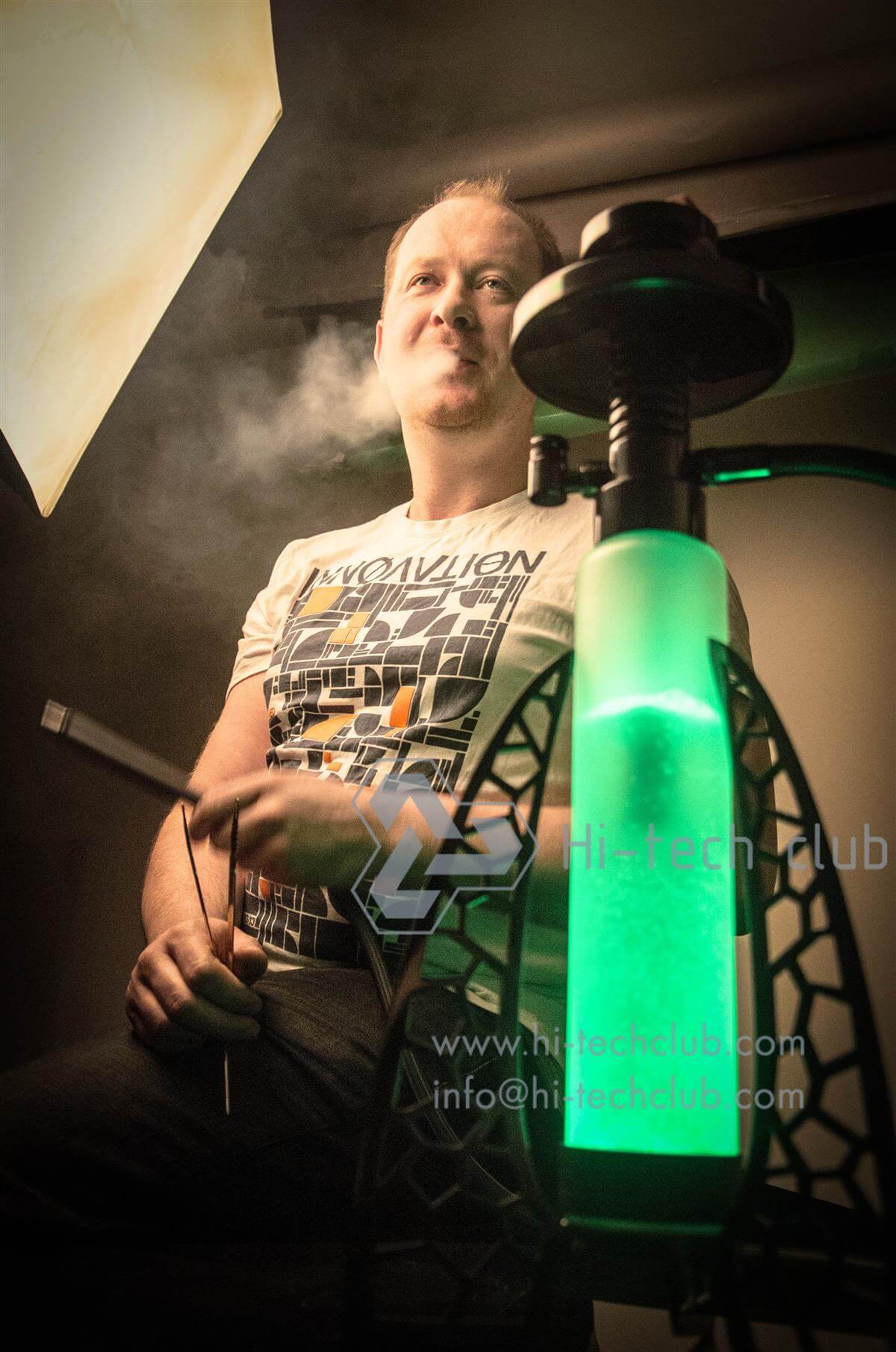 The author of some goods needs to have profound technical reasons in order to get the patent for his invention. If an innovator wants to receive a patent for an existing product, his innovation must be substantial and significantly improve it.

Hi-tech Сlub hookahs have not just an exceptional hi-tech design but also important innovations in a hookah structure. Due to the number of significant improvements, which are embodied in our devices, Hi-tech Club brand received a patent for an efficient model

Prior structure of hookah

In order to indicate what are the improvements in a new model, in addition to the drawings, it is necessary to describe the so-called prior structure of shishas and indicate its current shortcomings, the abolishment of which was the main purpose of Hi-tech Club brand.

Traditionally, hookah consist of the bulb, shaft, tobacco bowl, hose and mouthpiece. Typically, the shaft is attached to the bulb by means of rubber seals. The bowl for tobacco is connected with the shaft with rubber seal as well. Moreover a harmful foil is used for separation tobacco from the coals. 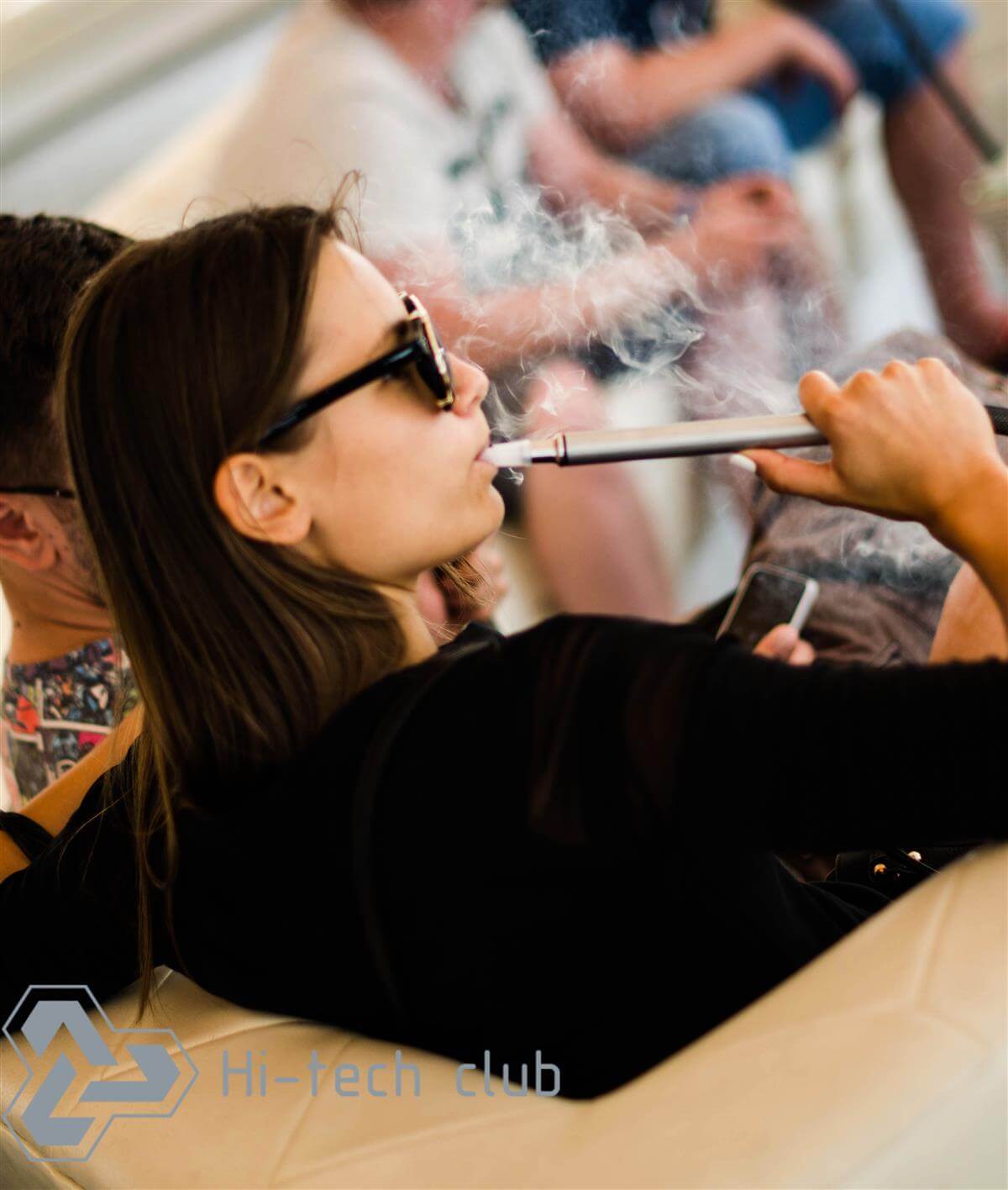 The disadvantage of common water pipes is a small heat capacity of the bowl for tobacco where foil is used. Tobacco is usually burned as it contacts with the coal through a thin foil and thereby it causes overheating and drying tobacco. As tobacco is burnt, the taste of smoke changes, it has bitter taste because there are by-products of combustion, and what is more it increases the toxicity of the smoke itself.

Leaks of conventional fasteners of common hookah also significantly affect to its smoking characteristics. Rubber seals, which are often used in hookahs of mass production are short-lived, quickly wear out, accumulate and pass the smoke. The number of assemblies and disassemblies of such smoking devices is quite limited.

In additional to the quality of used tobacco, the taste of smoke in a typical hookah is influenced by many factors such as the volume of the bulb, tightness of the whole system, thermal conductivity of the cup for coal, coal location, ability hookah server to manage with hookah foil and more others. It is also important what material a hookah was made of, as it can absorb and mix odors and smoke. 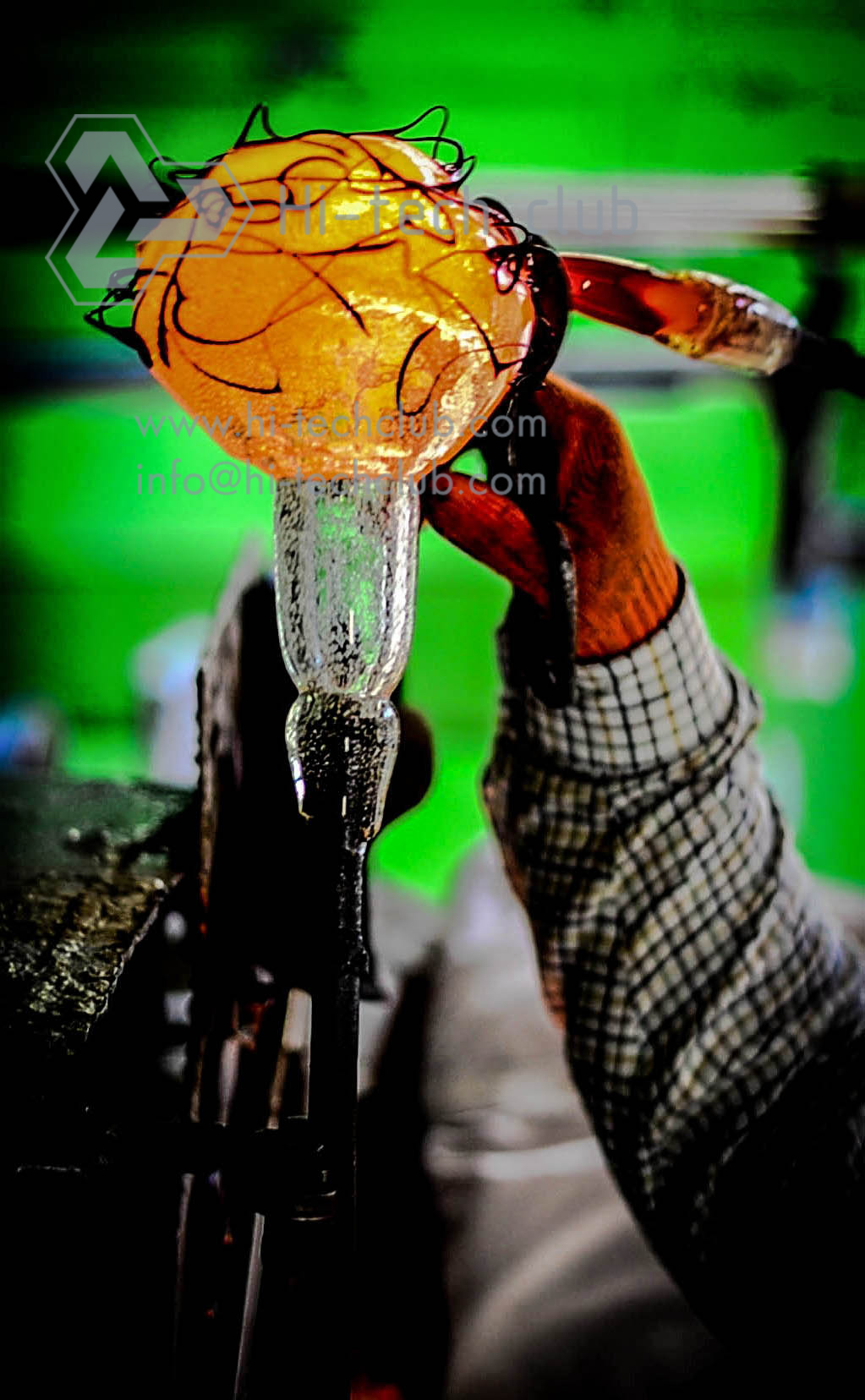 Because of quite unexpected taste characteristics of conventional hookahs, there are many blogs and forums where experienced hookah smokers share their knowledge how to circumvent the lack of outdated system a hookah production. So there are axioms like "in order not to burn the tobacco in the hookah, add the mint." But to add mint flavour to burned tobacco is not the solution to the problem.

Such as aesthetically perfect ritual as hookah smoking should bring only great relaxation and enjoyment, rather than the need for constant search of tricks and supervising of a hookah-server. In order to harmonize favourite tradition and decorate it by functional perfect device, a modern Hi-tech Club hookah has been designed.

Disclosure of a technical solution. 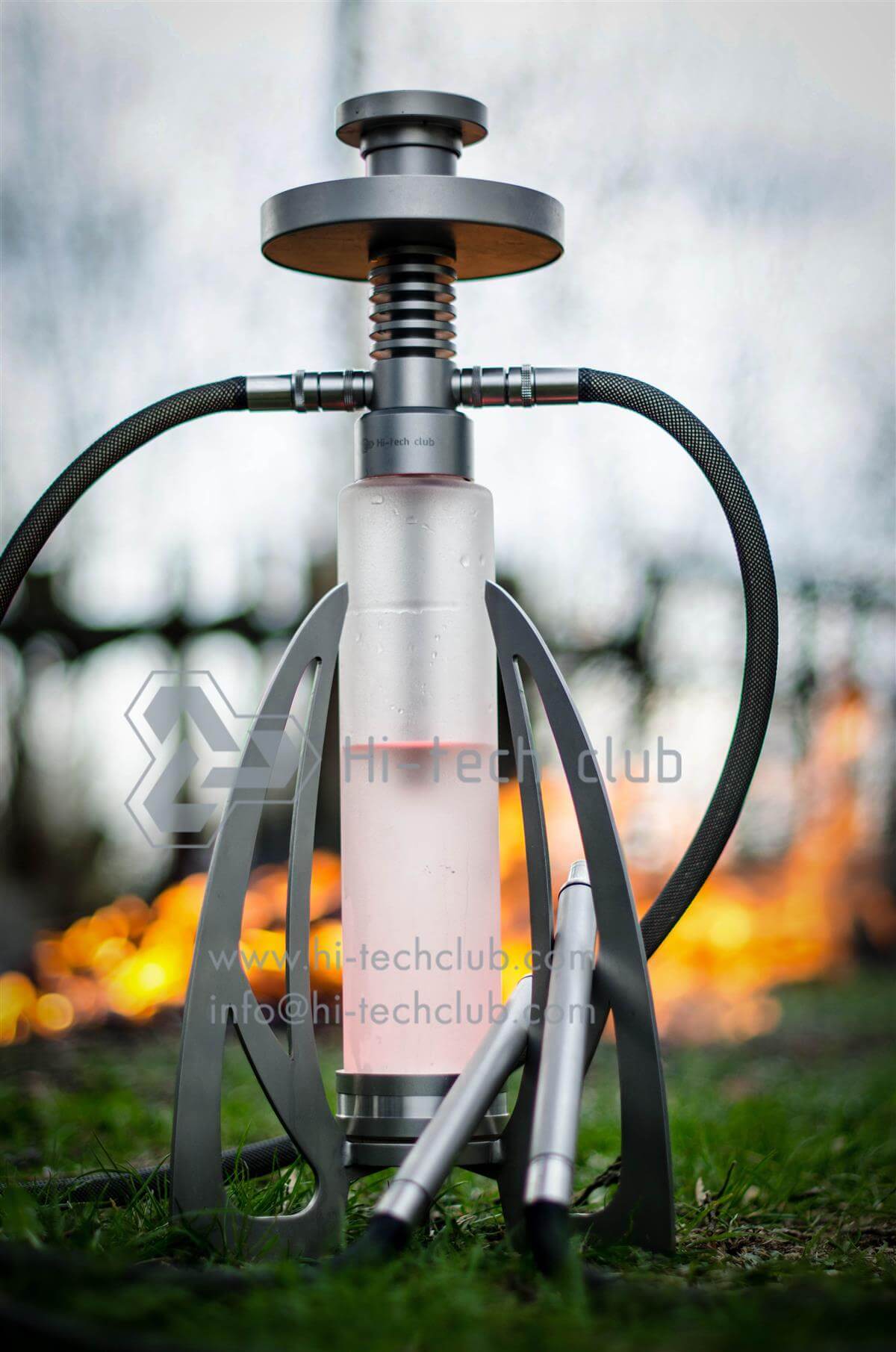 Set and accomplished objectives of the present useful model is to eliminate the above drawbacks in the existing hookahs. The technical result achieved by patent model is the elimination of tobacco burnins, preservation of a flavor, reduction of harm from hookah usage.

The technical result is achieved by the fact that the new system has been developed and all its elements are skillful with heat from the coals. The bowl for tobacco, bowl for coal and shaft all together represent constitutes an ideal thermosystem. Quality material collects picks excess heat from the coals and distributes it evenly and enough to warm the tobacco. In such a system it is needles to use foil consequently, there is no vapor in the smoke from the aluminum foil any more. 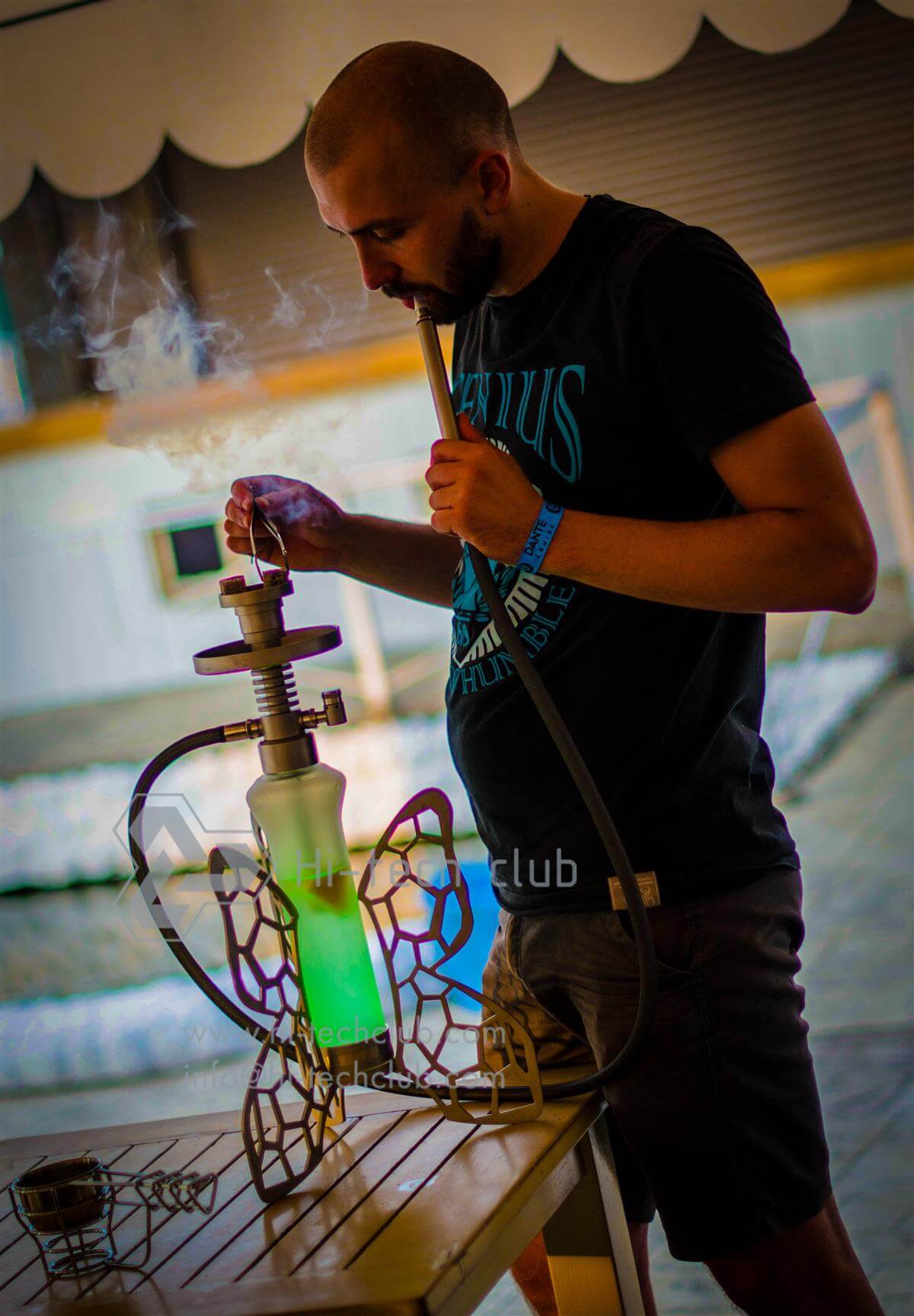 During hookah preparation approximately in one minute of heating, hookah gets the necessary amount of heat from coals, which at this moment, are in the center of the cup for coal. When the taste of tobacco is fully revealed, it will be enough to shift the coals from the centre to the side and just enjoy smoking.

The bowl for tobacco has a certain amount of holes for the passage of air. The area of the bowl, which is directly over the cup for tobacco, selects excessive heat from one side, and on the other side it ensures a constant and adequate heating of tobacco during smoking. 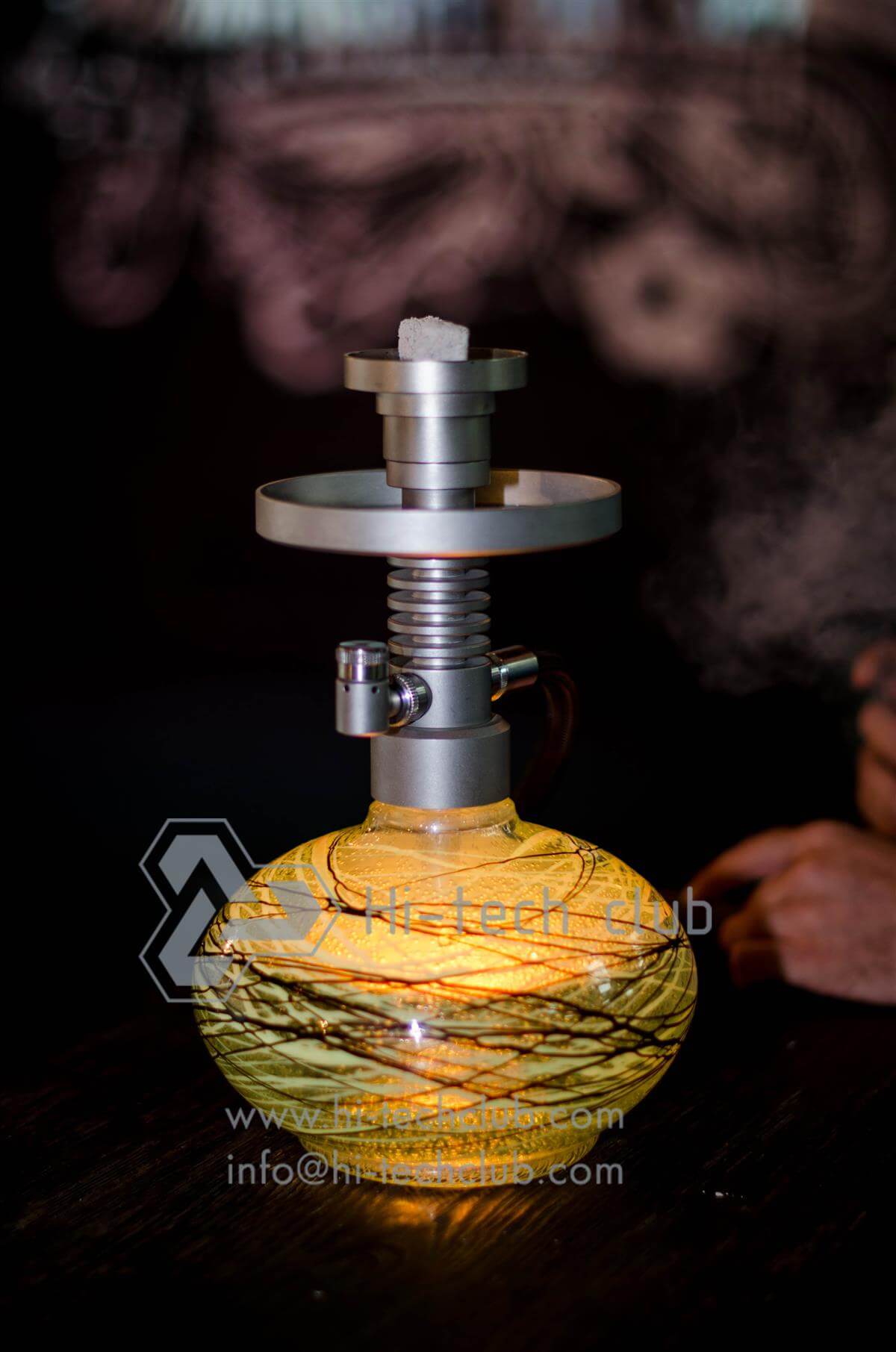 Special edges of the bowl for tobacco protects the coals from falling. Usually, its existence is enough to ensure a safe smoking. For absolute protection from coals falling once asked by client to guarantee the protection of antique furniture, a special accessory which can cover the hottest elements as bowl of coals and bowl for tobacco has recently been developed.

Involuntary dropping of coals is absolutely excluded. Due to hookah low centre of gravity and special calculation of the stand, Hi-tech Сlub hookah is stable on flat and not very smooth surfaces.

Leakage of common hookahs has been fixed it was done without the traditional rubber, or other seals, which have low coefficient heat. This type of connection is optimal, since it transfers heat and compensates the difference in temperature gradients of associated components. 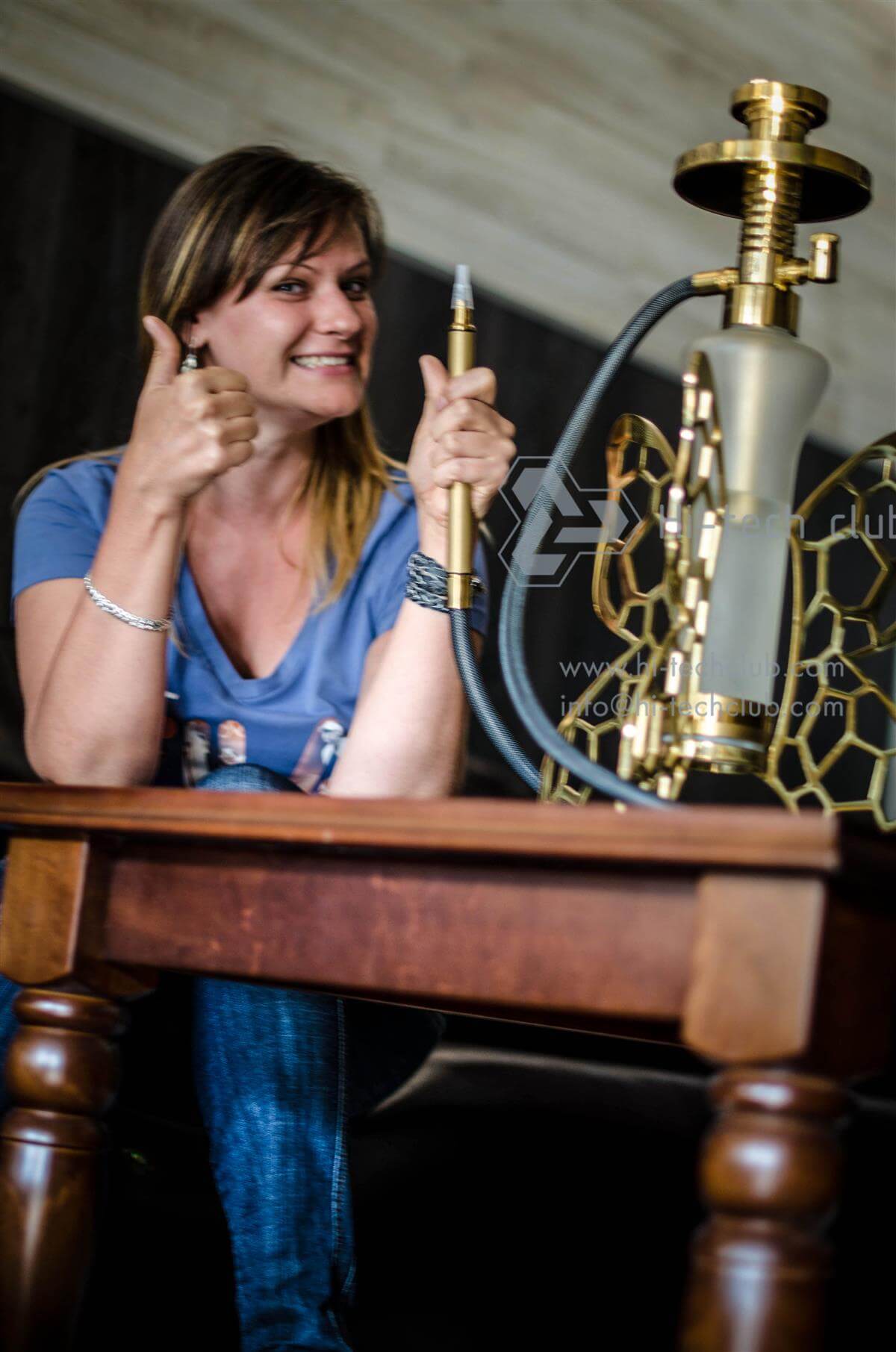 In all high-tech shisha structure exclusively threaded connection method elements are used. It provides a complete tightness, ease of assembly and disassembly of the hookah and indestructibility of the connection.

Since now, for the preparation of guaranteed tasty shisha you don't have to be a virtuoso and use special recipes, you just have to have good tobacco, hookah coals and Hi-tech Club hookah.